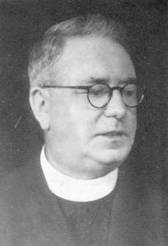 In the history of the Brisbane Archdiocese, the Parish of St James Coorparoo holds a place of privilege.  It was one of the first two districts to come under the building hand of Archbishop James Duhig when he became Co-Adjutor Archbishop of Brisbane.  Until this time, Catholics had to travel to St Joseph's at Kangaroo Point or catch a tram into the city to attend Mass at the Cathedral.
​
The man chosen as parish priest of the Parish of Coorparoo and Ipswich Road was Rev Jeremiah O'Leary.  For twelve months previously he had administered the Parish of St Patrick in Fortitude Valley.  Father O'Leary (later Dean O'Leary) was to serve out his ministry in this parish and was the parish's only parish priest before the arrival of the Augustinians in 1952.

Father O'Leary (pictured on the right) took up the position as parish priest on 17 March 1913.  Some indication of the drive of Archbishop Duhig can be seen from the timetable of events that accompanied Father O'Leary's appointment.  A fundraising meeting had been chaired by the Archbishop on 16 March;   a committee was formed and decided to build a Catholic school that would also be used as a church;  the foundation stone was then laid by Archbishop Duhig on 6 April;  the new building was blessed and opened as a church by him on 10 August 1913.  The building was 80 feet long by 30 feet wide (about 24.4m by 9.1m) and had 11 foot (3.4m) verandahs.

Along with the newly established parish came the Sisters of the Good Samaritan.  The sisters first lived in a house at 67 Kirkland Avenue before moving to a redeveloped "Langlands" on 20 August 1916.  The Sisters opened St James's School on 31 January 1917 with an enrolment of 200 pupils.  The community was headed by Sister Mary Helena Robinson (Superior and music teacher) while the school was under the control of Head Teacher Sister Joseph Fanning.  As part of the process of establishment of Villanova College, a new convent was built for the Good Samaritan Sisters.  The new two-storey brick building on its present site had its foundation stone laid 28 November 1952 and the sisters moved from St Scholastica's Convent over on the hill to St James's Convent the following year.
The Sisters' Golden Jubilee Mass was held in St James's Church on 5 November 1966.  Sister Mary Victor attended this Mass as the oldest surviving member of the Order of the Good Samaritan to have taught at the school.  The Mass's celebrant was Father Benignus Clowes OFM, the preacher Father Frank Scanlan, and the Gospel was read by Father Kevin Aspinall.  All three were past pupils of St James's School.
It very quickly became apparent that the school cum church building was far too small for the needs of the parish.  During the week, the infant classes were accommodated underneath the building!  In the year of his death, Archbishop Dunne had remarked,  "We don't want a tuppenny ha'penny church.  We want a large central church to suit the people."  And so our magnificent church building was eventually blessed and opened by Archbishop James Duhig on 29 November 1925.

From the creation of the parish in 1913 until control was handed to the Augustinians in 1952, some twenty men served the parish as Associate Pastors to Father O'Leary.
Source:  J Rush
The presbytery underwent major renovations to provide increased accommodation areas.  By 1958, the presbytery had become the Priory of the Augustinian Community of St James as is shown in the illustration above.  To the left of the Priory is the old parish hall.

The Augustinians took over the administration of the parish on 22 March 1952.  Dean O'Leary was, by this time, not only very old but also infirm.  On the insistence of Father Tom Hunt, the Augustinians took Dean O'Leary as a guest for the remainder of his days.  The Dean died soon after.  A stone to his memory holds pride of place near the altar of his church.

The first Augustinian Community at St James was a temporary one until the next scheduled Chapter could make more permanent arrangements.  The community comprised Fathers Tom Hunt, Les Seary and Finian Twomey.  Father Tom Hunt also took the role of Foundation Provincial for the recently established Australian Province.

Click here for a complete list of the Augustinian Communities of St James Coorparoo since 1952.
This list was compiled from information Father Brendan had as well as data collected by Stan Arneil for his book Out Where Dead Men Lie.