The Wonder of the Eucharist 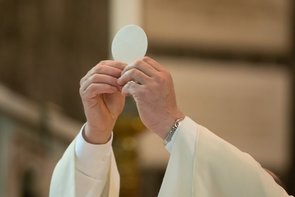 To find the words to describe the sheer greatness of God's gift to the human race in the Eucharist is a task beyond us.  Human imagination and intelligence cannot begin to grasp this wonderful, awesome, mind bending reality!  It is beyond price.  Nothing in the Universe can compare with it.  It is celebrated in space and time but the reality it brings to us is eternal because it makes present to us in the form of simple bread and wine Jesus Christ, Son of God, Son of Mary, truly God, truly man:  the Word made flesh.

If you want to get a better idea of the value and importance of the Eucharist, then you only need to contemplate the value and importance of Jesus Christ himself.  Our perspective, attitudes and faith with regard to Jesus will inform our perspective, attitudes and faith with regard to the Eucharist and vice versa.  Jesus is really and truly present in the Eucharist.  The bread and wine of the Eucharist are no mere symbols or metaphors:  they become the real presence of the One through whom the whole Universe came to exist.  He is the one who lived and died for you and me.  He is the one through whom, with whom and in whom we give praise and glory to God the Father.  He is our Lord, our God, our Brother and Friend.

John begins his Gospel with the same words that open the entire Bible in the Book of Genesis:  "In the beginning".  We are taken back to the dawn of creation, when space and time began.  It is so difficult to image a being who never had a beginning, who depends on no one for existence, who always was, always is, always will be.  The Blessed Trinity of Father, Son and Holy Spirit never ever began.  There was never a moment when the Trinity did not exist.

God spoke the Word and creation began.  God made it from nothing.  When God speaks, things happen.  God said,  "Let there be light" and there was light.  (Gn 1 : 3)  When God saw all that he had made he declared it to be good.  Only good things come from God and it is through the Word of God that all good things come.

Contemplate the awesome vision that faith gives us.  How vast is the Creation.  The extent of it "blows the mind" with the distances involved and the forces at work.  The distances it spans are quantified in numbers that leave us numb.  The latest estimate of the number of stars is staggering.  There are probably as many stars as all the grains of sand on all of the world's beaches and deserts combined, multiplied by ten.  That is only an educated guess:  there could well be more!  Since the dawn of human life on this beautiful fragile planet we call home, up until the present time, with all our accumulated knowledge of the Universe, we have merely "dipped our toe into a vast ocean".

And yet despite our littleness we were created for greatness.  We were made in the image and likeness of God and we were placed on this beautiful planet, which in all probability is totally unique in the entire Universe.

Because our need was great, because sin had become part of the human experience, God chose to come to us.  That all loving, all powerful Being, who brought this vast Universe into existence, came and stood on this earth.  Its dust covered his sandals.  He ate and drank, laughed and cried, lived, died, and rose again.  It all took place in our history and in our home.  This is how the Second Vatican Council described what God has done:

"It pleased God, in his Goodness and Wisdom, to reveal himself and to make known the mystery of his will.  His will was that we should have access to the Father, through Christ, the Word made flesh, in the Holy Spirit, and so become sharers in the divine nature."  (Dei Verbum no 2)

The Council went on to make a statement that was delightful in its simplicity but tremendously powerful in what flows from it:
"By this revelation, then, the invisible God, from the fullness of his love, chose to walk among us as his friends."  (Dei Verbum no 2)

God chose not to deal with the human race "at a distance".  Rather he entered into "our shoes" and from there announced the Good News of the forgiveness of our sin and the promise of eternal life for all who call upon his name.

St Paul, in his letter to the Church at Ephesus, expressed the reality of this mystery when he quoted what we believe is an ancient Christian hymn.  It describes how God, the Father of our Lord Jesus Christ, chose us before the world was made, to be holy.  His grace was a "free gift to us in the Beloved, in whom, through his blood, we gain our freedom, the forgiveness of our sins."  (Eph 1 : 4 - 6)

The letter to the Ephesians goes on to describe the momentous completion of the reality which the mystery contains.  This is entirely on God's initiative and according to God's time frame.  When the times had run their course the Father "would bring everything together under Christ, as head, everything in the heavens and everything on earth".  (Eph 1 : 10)

When Paul included those words in his letter, he could not have known the full extent of "everything in the heavens".  Of course, the Holy Spirit who was the inspiration for all the sacred authors, knew exactly what was being written.  The mind numbing Universe exists through Jesus Christ and for Jesus Christ, and we who are his brothers and sisters are called through our Baptism to share in his glory.

How can we possibly take these things for granted?  The truth is that God has visited us;  he lived and died for us.  He took our frail human nature to himself.  He had and has a human body and a human soul.  In his humanity God died on the cross, and united to his divinity rose from the dead on Easter morning, so that he could take us with him to heaven.  There he has prepared a place for us, according to his promise to the Apostles.  In the meantime he has not left us to make life's journey alone!  He is with us always, even to the end of time.  (Mt 28 : 20)

That promise is fulfilled in the Church in all its sacraments, but especially in his abiding presence in the Eucharist.

It is our duty and our joy to praise God.  We do that not as strangers, but as God's children.  We are joined to God as the sisters and brothers of the Lord of the Universe whom we worship and adore in the Eucharist.  Jesus, Son of God, died and he rose again to save us.  And we pray that God the Father will see and love in us what he sees and loves in Jesus.

When we go to Holy Communion that intimate union between God and ourselves finds its most wonderful expression.  As well, we are mysteriously united to all our sisters and brothers in the Church throughout the world.  And in a timeless act of worship we are joined with the saints and angels in heaven.  We are the communion of saints.

Let's always do our very best to allow the gift of the Eucharist to penetrate our lives.  Jesus wants us to share his mission to build up God's Kingdom on earth.  In communion with him all things are possible.  He is the vine stem who nourishes us its branches, to produce its fruit.  At the end of Mass the Church sends us forth on Christ's mission to renew the world according to his vision.  Let us do so with all the energy and enthusiasm of which we are capable, knowing that the Spirit of God walks beside us always.
A Pastoral Letter from the Australian Bishops for the Feast of Corpus Christi, Sunday 13 June 2004.